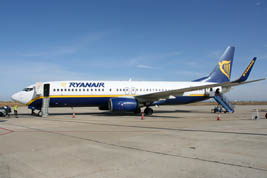 Cheap flights carrier Ryanair is apparently to launch two new high-class services that consolidate the airline’s shift in positioning from ‘no frills’ airline to ‘paid extras’.

"It’s a natural progression from the low cost model that Ryanair has made its own," said Skyscanner CEO Gareth Williams, commenting on the announcement. "Luxury is now an option and it makes perfect commercial sense. I don’t think it detracts from the company’s no frills positioning at all. Rather, it is helping to ensure that the airline can continue to offer rock bottom prices, subsidised by those who are prepared to pay for non-essential extras."

Passengers travelling in the new Ryanair Plus class will enjoy luxuries such as sick bags; seat pockets for the sick bags to be stored in; pre-assigned seats so they can sit next to their own children; reclining seats and check-in desks.

Details of the Ryanair Irish Gold class have not yet been confirmed but plans apparently include removing 2.5 cm leg room from all standard class seats to accommodate full length recliner chairs.

Prestwick, Stansted and East Midlands airports will pilot the launch of new executive lounges with refreshments, entertainment and spa facilities and Gordon Ramsay is rumoured to have been invited to craft a gourmet menu for the lounges and in-flight meals in a move echoing Little Chef’s partnership with Heston Blumenthal.

In-flight entertainment plans for Irish Gold class include a scaled down version of Riverdance with Michael Flatley in discussions with the airline to choreograph a version that will work in the standard aisle space.

“We’re huge fans of Ryanair and we’re looking forward to confirmation of all the details of the new services which should be announced later today (April 1st)” added Gareth Williams.