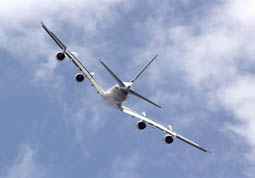 Ryanair is planning to eliminate all of its airport passenger check-in counters by the end of this year, a strategy that has never been attempted by another carrier.

The Dublin-based discount carrier plans to get rid of its ticket counters, shifting some of those employees to staff drop-off stations for passengers' checked bags.

"Ryanair takes things to such an extreme," said Shaun Malay, senior vice president for discount travel website CheapOAir.com. “They do a lot of things other carriers don’t. What works for Ryanair doesn't work for some other airlines."Chris Barnes, commercial director for the Airline Business Group at Amadeus North America, said, "The 100% elimination of check-in counters seems a bit optimistic to me."

He added, "The self-service concept is not new to the travel industry, and all carriers have been streamlining their systems to go in this direction. Distribution is all about automation, so the whole electronic era of e-ticketing and e-commerce has facilitated this initiative."

Ryanair has released few details of exactly how the ticket counter elimination would work, but CEO Michael O’Leary told the Daily Telegraph that the airline ultimately wants only 20% of its passengers to check bags.

The airline says about 75% of its passengers now check in online, and the carrier’s website says flyers can check in there from 14 days up to four hours before departure.

At the same time the carrier is trying to capture more bookings online, the airline is introducing third-party advertising on its website. Ryanair recently hired digital advertising agency Ad2One to sell ads, starting in the U.K. and Ireland and expanding later to other European markets.